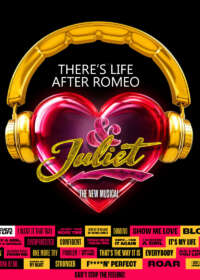 $45
These tickets are sold when the show is sold-out

In a raucous jukebox musical comedy, Juliet suffers heartbreak after losing her Romeo, but instead of dying herself, she parties like its 1999 but then struggles to find her own identity and purpose in life.

Fresh and riotously funny, & JULIET is a jukebox musical that explodes with dozens of pop anthems you already know and love by legendary songwriter Max Martin, including …Baby One More Time, Since U Been Gone, Roar, It’s My Life, I Want It That Way, and Can’t Stop the Feeling!; as well as One More Try, a brand-new song written especially for the musical.

Winner of six WhatsOnStage Awards and three Olivier Awards, this vibrant, colorful and timely musical is brought to life by an award-winning creative team, with direction by Luke Sheppard (In the Heights), story by David West Read (Schitt’s Creek), and electrifying choreography by Jennifer Weber.

The new musical, which uses contemporary pop songs to flip the script on the traditional story of Romeo and Juliet, received its World Premiere at the Manchester Opera House in England in September 2019 before moving to the West End's Shaftesbury Theatre.

The North American premiere began performances on June 22, 2022 at Toronto's Princess of Wales Theatre, for a run through August 14, 2022 before moving to NYC Broadway.

What if Juliet didn't wnd it all over Romeo?

With her bags packed and ready to escape Verona, Juliet recovers from the heartbreaking loss of Romeo in the best way possible… by dancing the night away with her best friends and getting smashed.

But when the sparkle fades, the confetti has fallen to the ground and reality catches up, it’s clear that Juliet needs to face her past in order to find her future. Can Juliet reclaim a story that has been written in the stars? Is there really life after Romeo?

Is & Juliet Good for Kids?

The show is good for children over the age of 12