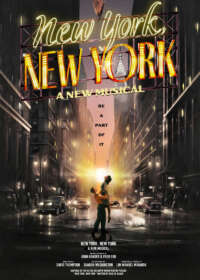 Set in 1946 around V-J Day (Victory over Japan Day) the show follows a jazz saxophonist and a pop singer whose marriage falls apart after their successful careers take them on different upward paths.

New York, New York is a glittering love letter to the greatest city in the world.

Featuring an exhilarating new score by the incomparable John Kander and Fred Ebb, an original story by David Thompson with Sharon Washington, additional lyrics by Lin-Manuel Miranda, and visionary direction and choreography by Susan Stroman, New York, New York whisks the audience through the very heart of the city that never sleeps.

The new 2023 Broadway show is loosely based on the 1977 Martin Scorsese film New York, New York which starred Liza Minnelli and Robert De Niro in the lead roles.

The Broadway show features the iconic song "New York, New York" which was written for Scorsese's musical drama film which was released in April 1977. The movie was a box-office failure and lost significant money for the studio.

In 1979, two years after the original movie flopped, Frank Sinatra re-recorded the movie's signature song for his own album and then it finally became a hit.

Nowadays, most people ironically associate the New York, New York theme song with Sinatra, not the original singer Liza Minnelli and certainly not the original movie that has long been forgotten.

The new Broadway show New York, New York features many of the original songs from the movie by John Kander and Fred Ebb.

The show also features some new songs by Kander and the Broadway man-of-the-moment, Lin-Manuel Miranda.

A jazz saxophonist and a pop singer fall madly in love and marry at the end of the Second World War. The saxophonist's outrageously volatile personality places a continual strain on their relationship and after they have a baby, their marriage crumbles.

Their careers develop on separate, but successful, trajectories until they can no longer ignore their former partner's achievements and passion for each other.

It is 1946, the war is over, and a resurgent New York is beginning to rebuild. As steel beams swing overhead, a collection of artists has dreams as big and diverse as the city itself. But do these singers, dancers, musicians and makers have what it takes to survive this place, let alone to succeed? If they can make it there, they can make it anywhere.