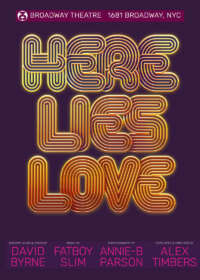 The rise and fall of former First Lady of the Philippines Imelda Marcos, and her penchant for money, power, jewels and her 1,060 pairs of shoes

2013 Stint At The Public Theatre

Various Show Incarnations Over The Years

The musical returned to The Public in 2014, the year in which it also debuted at London’s Royal National Theatre, earning multiple Olivier nominations. The most recent production took place at Seattle Repertory Theatre in 2017.

"Broadway Theatre" Often An Empty Venue Due To a Curse or Mismanagement?

The Broadway Theatre is empty more often that it has a show in it, so it comes as a surprise that this show will sit-down in it.

The theatre landlord, The Shubert Organization, must be using this theatre as tax write off, as very few Broadway shows are ever sucessfull here. It often seems like the kiss of death for shows to just appear on these cursed boards.

Past Show Debacles At 'The Broadway Theatre'

2020's West Side Story ended on a number of sour notes, especially because of its runaway production costs. The show also faced scrutiny for its casting of Amar Ramasar, a principal dancer who was embroiled in a #MeToo scandal. Scott Rudin was also a producer on this show and his four decades of abuse finally came to an end at the same time.

1991's Miss Saigon was the last hit at this theatre, as everything else since has failed miserably in both box office and critically. This includes: The Little Prince, King Kong and Rocktopia. There hasn't been anything else of note at this theatre since Miss Saigon's closing in 2001 and it usually just sits empty, despite a plethora of producers looking for Broadway space. Only the Nederlander Theatre does worse in terms of show failures, but at least it does not lie empty.

The show provides a semi-immersive experience where the audience is intermingled with the actors.

The Broadway Theatre is transformed from its traditional proscenium floor space into a dance club environment. Both standing and seated tickets are available.

This show is not intended for audiences under the age of 16 years old.