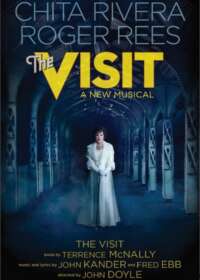 The Visit on Broadway Show Information and History

The Visit is a musical written and created by John Kander and Fred Ebb (Cabaret, Chicago, The Scottsboro Boys). These writers have many Tony accolades to their credit including Cabaret, Chicago and Kiss of the Spider Woman. The book was written by Terrence McNally (It’s Only a Play, Love! Valour! Compassion!). The show is based on a satirical play by Friedrich Durrenmatt (originally entitled Der Besuch der alten Dame) and was adapted for the stage by Maurice Valency.

The Visit on Broadway Background

Chita Rivera (Kiss of the Spider Woman, The Rink) has been developing the role of Claire Zachanassian for many years, and now is her chance to finally debut the role on Broadway. This latest incarnation is a revised, one-act version of the musical, which had a tryout run this past summer at the Williamstown Theatre Festival to rave reviews.

The plot is based upon the oft-widowed character Claire Zachanassian (played by Rivera). Zachanassian is the richest woman in the world but returns to the town of her birth, which has now become derelict and forlorn. The locals that still inhabit the town hope that her return will save them from a dismal existence, but with her arrival comes with a high price to pay. Many years earlier Anton Shell (played by Roger Rees) scorned Zachanassian and now the chickens have come home to roost for Shell.

Starring Chita Rivera alongside Roger Rees (The Addams Family, Peter and the Starcatcher), The Visit is based off of Friedrich Durrenmatt’s 1956 satirical play. Rivera plays Claire Zachanassian, one of the world’s richest women, who returns to her hometown which is facing a lot of poverty. Claire is a many time widow, who brings her bad luck back to her hometown; although residents are hoping that her wealth will help them. Rees plays Anton Schnell, a man who scorned Claire many years ago, and soon it becomes clear that Claire has returned precisely to exact revenge on Anton. The plot twists and turns until the two eventually come to terms.

Is The Visit Good for Kids?

The show is appropriate for children over the age of 10. Children under the age of 4 are not permitted in the theatre.