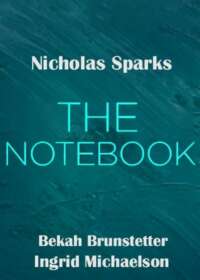 The Notebook on Broadway Background

The Notebook was originally a romance book written by the novelist, Nicholas Sparks in 1996. Sparks got the inspiration to write the book by observing his own grandparent’s 60+ year marriage.

The book was published in October 1996 and became a New York Times Best Seller in just its first week of book sales. The book stayed on the NYTimes list for over a year afterwards.

Nicholas Sparks is an American novelist who has published twenty-two novels and two non-fiction books. Most of his works are in the style of women's pulp fiction romance, with few men ever reading them. The subject matter often follows the same format with some of his books becoming New York Times bestsellers, with over 115 million copies sold worldwide.

In 2004 the sleeper-hit turned blockbuster movie was developed and starred Ryan Gosling and Rachel McAdams. The movie became a fan favorite and has over 19 million DVD's sold to date. In 2009 the musical version of The Notebook was adapted from the book by the Emmy Award nominee, Bekah Brunstetter and the show lyrics were written by the American singer-songwriter, Ingrid Michaelson.

The stage version of the show was originally developed as a musical in 2009 and has languished since then and has not played any major theatre. In September 2020, the musical was finally scheduled to make its world premiere at Chicago’s Shakespeare Theatre, which was then to set up the show for its Broadway run in 2021. The COVID-19 pandemic derailed all those plans and now the show is scheduled for the 2022/2023 Broadway season.

Finally a Glimmer of Light for the Broadway Show

Although the show has been shelved for so long, the new musical adaptation of "The Notebook," has planned its pandemic-delayed first production in September, 2022 at the Chicago Shakespeare Theater.

The show songs are written by Ingrid Michaelson, the book is by Bekah Brunstetter and the show is co-directed by Michael Greif and Schele Williams.

The story takes place in North Carolina over the course of three decades, notably 1930, 1940 and then 1990. The audience follows along from the perspective of the protagonist Noah Calhoun through the trials and tribulations. They see the heated love and passionate disputes between the two main characters Noah Calhoun and Allie Hamilton.

The Sparks Fly Between Noah Calhoun and Allie Hamilton

Calhoun wants to protect and love Hamilton, but the sparks fly. They meet during a long hot summer in the early 1930's and proceed to have a whirlwind summer fling. More than a decade later, the two cross paths again when Hamilton is set to be married to another man and Calhoun cannot stand to let that happen.

The two are portrayed as a deeply flawed, yet relatable couple who regularly get into tempestuous arguments with each other, but who also have a deep sensual and desirous love for one another. The two are eventually shown as 90+ year old grandparents who now have a large family around them and are still together, except with one major challenge.

Is The Notebook Good for Kids?

The Notebook deals with mature issues that often come up in long-term relationships and also depicts some mildly sexual scenes. The show is not recommended for people under the age of 16.

Based on a Novel by
Nicholas Sparks