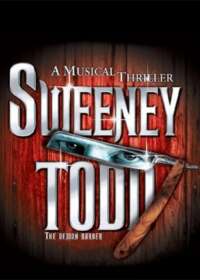 Sweeney Todd The Musical first debuted on Broadway in 1979 as a musical adaptation of Christopher Bond’s 1973 off-Broadway play of the same name. The musical features music and lyrics written by the legendary Broadway composer, Stephen Sondeheim. Over the course of his long theatrical career, Sondhein received eight Tony Awards, eight Grammy Awards, an Academy Award and the Pulitzer Prize for many of his classic Broadway productions such as Company, Into the Woods, and West Side Story. Since the show’s original Broadway debut in 1979, Sweeney Todd has been revived twice, the first being in 1989 and the second being in 2005. The 1989 revival ran for just five months and was designed on a much smaller scale to make the show feel more intimate, leading many to refer to the production as “Teeny Todd”. The 2005 revival was a transfer of John Doyle’s West End production in which all of the actors played their own musical instruments. The production ran for 349 performances and was nominated for six Tonys of which it won two for “Best Direction in a Musical” and “Best Orchestration”.

What’s Sweeney Todd: The Demon Barber of Fleet Street Like?

In 1946, a mysterious man named Sweeney Todd is rescued at sea by a young sailor named Anthony Hope. Todd tells Hope that he is a former barber who had his life and family destroyed by a corrupt judge who had lusted for Todd’s wife and had banished him to Australia on a convict ship for some trumped up charges. After his sea rescue, Todd makes it back to land and enters into a pie shop in town and talks with the pie shop owner, Mrs. Lovett. He inquires about the upstairs tenant and it is revealed that the tenant was in fact Sweeney Todd before he was betrayed by the judge and sent overseas. With the help of the Pie Maker, Mrs Lovett, Todd then swears revenge on all those that have betrayed him. With Lovett, he returns to his career as a barber with the intent to kill the judge, but he finds he cannot stop and ends up on a rampage of murder of his own customers.

Is Sweeney Todd: The Demon Barber of Fleet Street Good for Kids?

Sweeney Todd focuses on dark subject matter such as murder, sexual abuse, and suicide, thus the show is not recommended for those under the age of 18.