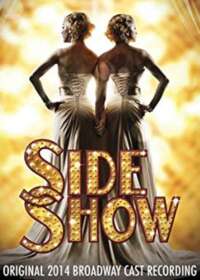 Side Show on Broadway Show Information and History

Side Show is a musical based on the real story of conjoined twins Daisy and Violet Hilton, as well as the rest of their freak show ensemble.

Side Show on Broadway Background

The show originally premiered on Broadway in 1997, when it was nominated for the Tony Award for Best Musical; this is its first revival. The book and lyrics are by Bill Russell (Elegies for Angels), and the music is by Henry Krieger (Dreamgirls). This production is directed by Bill Condon, and choreographed by Anthony Van Laast. The conjoined twins Daisy and Violet Hilton are played by Emily Padgett (Rock of Ages, Grease) and Erin Davie (The Mystery of Edwin Drood, A Little Night Music). The show is vastly entertaining with its array of side show characters, including not only the conjoined twins, but also a bearded lady, a geek, a Cannibal king, a reptile man, and a fortune teller.

Side Show is a trip through 1920s to 1930s show business, showing the worlds of carnival as well as Hollywood. The show has dark undertones but a comic outer layer, promising a surefire fun time. When the twins find success, it turns out it was not exactly what they had been dreaming about their whole lives, and we see that you must be careful what you wish for

Is Side Show Good for Kids?