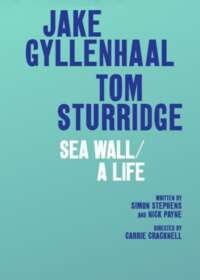 Public Theater transfer of two separate stories about death and its aftermath. The non-cohesive stories are performed as separate monologues and are a jolting description about death, and how the living deal with it.

Movie star Jake Gyllenhaal and Broadway/movie/TV star Tom Sturridge star in Sea Wall/A Life. Coming off of its Off- Broadway run at The Public Theater, this production in two parts, tells the story of love, the beauty of life, and the importance of family from two different character viewpoints. The two monologues were written separately and are performed consecutively. The show takes you on a journey of the different stages of life, from being a son to becoming a father and the transformation of love from the passage of time. The Public theatre has had few successes on Broadway since it hosted Lin Manuel-Miranda's Hamilton way back in February 2015, where The Public hosted its Off-Broadway debut, which led to a sell-out in tickets and quick show transfer to Broadway. Sea Wall/A Life is a very different animal and would probably not be able to make the leap if it wasn't for the talents of its leads, Jake Gyllenhaal and Tom Sturridge. The work of playwright Nick Payne and director Carrie Cracknell provides audiences with what is a pretty simple show, but with a complex narrative that challenge the human spirit.

In Sea Wall, Tom Sturridge provides the first of the two monologues that hits the usual big-picture challenges about love, life, knowledge and ultimately death. It parses the human need to attempt to know the unknowable, and be the unthinkable, all pretty heady stuff, that only the most high-brow and Broadway audiences may really understand. The story is the telling of the characters discovery (from an underwater perspective) of the sea wall at his local port and how it often imitates his own life with its unseen obstacles, always just below the surface, but never far away. The monologue predictably ends with death, but aspires to find a way of its own despair. To give the show some credibility, the writer sets the piece to a time of great sadness and provides a meditation on how we say goodbye to those we love most. The search for God becomes a common thread in this show, as it often does in times of death.

In A Life, Jake Gyllenhaal brings Nick Payne's life to work in a monologue depiction of a man struggling with his own life in the wake of the death of his father and the birth of his first child. When the monologue begins to start sounding whiny, Gyllenhaal does his best to rein it back in.

Audiences do not describe the two monologues as "enjoyable: and and are more likely to use words like "harrowing" and "depressing". This does not mean that audiences will avoid seeing the show altogether, as both actors deliver a tour de force in both their roles.

The show is most appropriate for those over the age of 12.