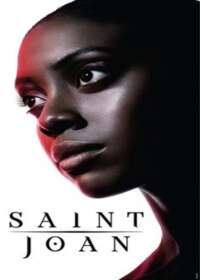 When George Bernard Shaw wrote Saint Joan for its first Broadway production in 1923, it was just three years after her canonization as a Roman Catholic Saint. Joan of Arc was a peasant girl in 15th century France who could hear the voices of saints. Shaw composed this play as a dramatization of the known events of her life.

While she was successful in battle, her people ultimately betrayed her, and she was tried for heresy. Since the premiere in 1923, Saint Joan has been produced on Broadway 8 times: in 1936 starring Katherine Cornell, in 1951 starring Uta Hagen, in 1956 starring Siobhán McKenna, in 1962 starring Barbara Jefford, in 1968 starring Diana Sands, in 1977 starring Lynn Redgrave, in 1993 starring Maryann Plunkett, and now, in 2018, a new production starring Condola Rashad.

Condola Rashad has appeared on Broadway 4 times before: as Juliet in Romeo and Juliet (2013), as Cheryl in Stick Fly (2011), as Thelma The Trip to Bountiful (2013), and as Emmy in A Doll’s House, Part 2 (2017) – receiving Tony Award nominations for Best Featured Actress in a Play for the last three of those. Finally, with Saint Joan, she has stepped up to play the lead part. All in all, this is a powerful and enduring work about an incredible historical figure, embodied by a great young actress of our time, Condola Rashad.

Condola Rashad is an exciting new talent taking on this timeless role of Joan of Arc in George Bernard Shaw’s lauded play Saint Joan. The production is directed by Daniel Sullivan, who also helms this season’s John Lithgow: Stories by Heart. Sullivan is an extremely accomplished director whose many other credits include The Little Foxes, Sylvia, The Country House, The Snow Geese, Orphans, Glengarry Glen Ross, and The Columnist. Saint Joan won the 1993 Tony Award for Best Revival of a Play, in addition to many other honors, including the 2008 Laurence Olivier Award for Best Revival for that year’s London production. The material has also been adapted many times for the screen, such as the 1957 film written by Graham Greene, directed by Otto Preminger. Other works inspired by Shaw’s play include Lanford Wilson’s play Book of Days, which is a modern day reimagining produced in 2000.

Is Saint Joan Good for Kids?

The show is most appropriate for those over the age of 10. Children under the age of 4 are not permitted in the theatre.