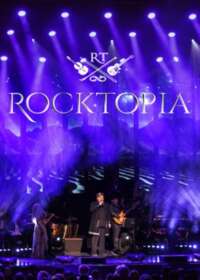 This spring 2018, Rocktopia is set to dazzle audiences at the Broadway Theatre. The brainchild of veteran Broadway musical performer Rob Evan, Rocktopia is the fusion of classic rock and classical music, literally. While other Broadway shows, from The Phantom of the Opera to Rent, have found success in blending these two musical styles, Rocktopia does so in a more literal way.

The score is made up of an amalgam of classic ’80s rock songs and well-known classical arias, seeking to honor both art forms by highlighting the commonalities between them. The musical innovators behind the songs selections include "Mozart", "Heart", "Beethoven", "Journey", "Handel", "U2", "Rachmaninoff", "Foreigner", "Tchaikovsky", "Queen", "Copland", and "The Who", among others. Evan has appeared on Broadway previously in musicals including Les Misérables, where he played Jean Valjean in the 1990s, as well as the title roles in Jekyll & Hyde, multiple parts in the revival of Little Shop of Horrors in 2004, and the role of Kerchak in Tarzan in 2007.

While none of these were original cast member parts, Evan nevertheless has been able to build a breadth of experience on the Broadway stage. In addition, he is a longtime performer with the Trans-Siberian Orchestra, an American progressive rock band that also blends the genres of classic rock and classic music, participating in the albums “The Lost Christmas Eve” and “Night Castle.”

Rocktopia has been cited as a musical revolution, fusing the timeless styles of classic rock and classical music, based on the premise that if Mozart and Beethoven were alive today, they would be considered rock stars. Pioneered by Rob Evan, along with his musical collaborator Randall Craig Fleischer, the show promises to offer one-of-a-kind, spine-tingling musical arrangements. The large group of performers includes a choir of 40, an orchestra of 20, a 5-piece rock band, and a group of talented lead vocalists. In addition to Rob Evan, they include singers Chloe Lowery, Tony Vincent, Kimberly Nichole and Alyson Cambridge. Along with violinist Máiréad Nesbitt, guitarist Tony Bruno, pianist Henry Aronson, bass player Mat Fieldes, and drummer Alex Alexander. Rocktopia seeks to break down the barriers between these two genres, which are normally considered entirely separate from one another, demonstrating their parallels while honoring both styles through original new pieces.

Is Rocktopia Good for Kids?

Yes, the show is appropriate for all ages. Children under the age of 4 will not be permitted in the theatre.