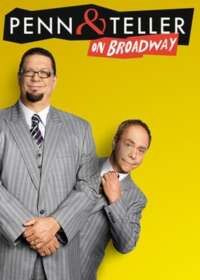 This limited engagement magic special is scheduled for a brief run of six weeks at the Marquis Theatre, and is simply called Penn & Teller. Currently, they have a long running show in Las Vegas, of which some elements will be incorporated into this Broadway engagement.

The pair has a television show on the CW network called “Penn & Teller: Fool Us!” and they recently collaborated on a documentary entitled Tim’s Vermeer which received a nomination for the Academy Award for Best Documentary. They have been performing together for 40 years, focusing on both magic and comedy, although they are principally categorized as magicians.

They have also branched off and worked individually over the years, but this duo has also remained together as a tight partnership, to which this new Broadway run is a testament. Overall, this comedic duo never fails to amaze their audiences, and this limited Broadway engagement is sure to be a spectacular experience.

Penn & Teller are illusionists as well as entertainers, comedians, and magicians.

The style of their work varies greatly, including light hearted gags as well as political satire. Sometimes their effects are highly visual and are effective due to their shock appeal, and sometimes they even reach the brink of violence, but of course it’s all an illusion.

Their routines can tend towards the intellectual, as they discuss the underpinnings of the magic they perform, or they can likewise be completely of the daredevil variety, shooting bullets or hanging upside down over a bed of nails. Sometimes they invent magic tricks with the purpose of explaining how they are done, with the bigger purpose being predetermined from the beginning.

Is Penn & Teller Good for Kids?

The show may be most appropriate for children over the age of 8, although some fake violence will be demonstrated. Children under the age of 4 are not allowed in the theatre.