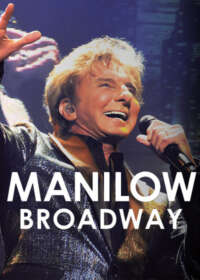 A Broadway concert performance where the legendary Barry Manilow performs many of his hit songs from his long and illustrious career.

Manilow Broadway is a Broadway musical performance starring the Grammy Award winning and Multi-Platinum selling artist Barry Manillow. Manilow is an American born singer-songwriter and music producer whose musical career spans over 50 years. He has recorded and produced over 30 songs which have made it to the “Top Ten List” on the Adult Contemporary Chart and 46 Top 40 singles on the same chart. Manilow is no stranger to Broadway, this is his fourth production where he has performed his show in a Broadway theatre. His last three Broadway musical performances have been in 1977, where he received a Special Tony Award, 1989, where he performed in Broadway's Gershwin Theatre and in 2013, for an 8-week run at Broadway’s “St. James Theatre” where he sold out every night of the event. Manilow also has a residency at the Westgate International Theatre in Las Vegas and has just celebrated his 500th show there. Right after this show concludes on Broadway, he will be headlining London’s The Proms in the Park, which is considered to be one of the most significant music events in British culture.

Manilow Broadway is a concert styled Broadway production where Barry Manilow performs a non-stop set of his top 40 hits. He sings his top rated songs such as "Could It Be Magic", "Mandy", "I Write the Songs" and "Can't Smile Without You" and many more of his songs. He also, has a surprise set list which changes almost nightly with songs all written by Manilow himself. At the show, he gets the audience to sing and clap along, which helps bring back memories of the good-old-days when life was fun and times were easy.

Is Manilow Broadway Good for Kids?

Children of all ages are encouraged and welcome to watch the show but will probably will not enjoy the show because they may not know many of Manilow’s songs.