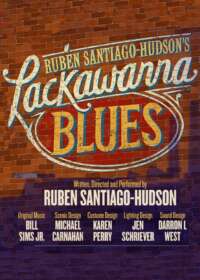 Set in a 1950s blues-era boarding house outside Buffalo, New York, the matriarch welcomes all, but receives a considerable shock as a turn of events turns things sour.

Tony Award winner Ruben Santiago-Hudson returns to MTC for the Broadway debut of his solo play celebrating the strong, big-hearted woman who raised him in Lackawanna, New York. The woman was Miss Rachel and she was able to mold Santiago-Hudson through all of his formative years 1953-1963. The solo performance is accompanied by live music that was written by acclaimed composer Bill Sims, Jr..

Sims is a multi-instrumentalist and vocalist and was an internationally respected “Master of the Blues” and was inducted into the Blues Hall of Fame in 2012. The music is performed at the show by Blues Hall of Fame Guitarist Junior Mack. Mack is an accomplished blues-rock musician and soulful vocalist who has been playing guitar since 1968.

Is Lackawanna Blues Good for Kids?