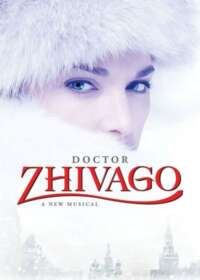 Doctor Zhivago is based on the Nobel Prize winning novel by Boris Pasternak and tells the story of epic romance surrounding the final era of Czarist Russia.

After eight years in development which was also turned into an Oscar winning classic film by David Lean, Doctor Zhivago makes it to Broadway.

Yurii Zhivago is played by Tam Mutu, and his beloved Lara Guishar is played by Kelli Barrett. Additional roles are played by Josh Canfield, Lora Lee Gayer, Tom Hewitt, and Paul Nolan. With a gorgeous score by Lucy Simon, the musical also has lyrics by Michael Korie (Happiness) written in collaboration with Amy Powers (When We Were Kings) and the book is by Michael Weller (films of Hair and Ragtime), the musical will be directed by Des McAnuff (Jersey Boys, The Who’s Tommy) and choreographed by Kelly Devine (Rocky).

Set amidst the Russian Revolution, this epic story has a powerful score to complement the modern classic story. The sprawling love story encompasses a wide expanse of history and geography. Beginning in the cities of Imperial Russia, continuing to the fronts of World War One and the Russian Revolution, Stalin's Siberian Gulag and finishing in the aftermath of World War II. Despite this challenge, the creative team has refined the story over so many years of development, that this musical is a beautiful and powerful treat.

Is Doctor Zhivago Good for Kids?

The show is recommended for those over the age of 8. Children under the age of 4 are not permitted in the theatre