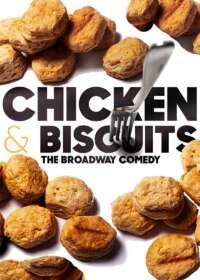 Chicken and Biscuits on Broadway Show Information and History

A black family mourns the loss of their patriarch, but gets a shock at his funeral when an awkward secret is divulged and family mayhem ensues.

Chicken and Biscuits on Broadway Background

Chicken and Biscuits comes to Broadway after first staging its premiere at the Queens Theatre in Flushing Meadows on Feb. 28, 2020. The show only ran for two weeks at that theatre due to the COVID-19 shutdown. This show is the first one to ever graduate to a Broadway run from the Queens Theatre.

The show has a lot of firsts, with the show director, Zhailon Levingston, being the youngest ever Broadway show director at just 22 years of age. The show writer, Douglas Lyons, made his acting debut in The Book of Mormon in 2011 and also appeared in Beautiful in 2015.

Chicken & Biscuits is a story of love, messiness, racism and healing in a comedically complex black family. The Jenkins family is finally coming together to celebrate the life of their now deceased father. Any hopes for a peaceful reunion are dashed when a family secret shows up at the funeral. The family members are now pitted against one another and some comedic mayhem ensues.

Is Chicken and Biscuits Good for Kids?

This show contains a lot of adult content and many swear words. This show may not suitable for under 16's,.