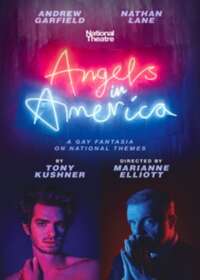 Angels in America: Millennium Approaches and Perestroika is a two-part masterpiece written by Tony Kushner, revived on Broadway for the first time since its TV debut in 1993. The two parts, dubbed Angels in America: Millennium Approaches, and Angels in America: Perestroika, are revived simultaneously at the Neil Simon Theatre, together amounting to over seven hours of glorious theatre. The first part is 3.5 hours long and the second part is 4 hours long and given its excessive length. Despite critical and box office success the two parts in their long form are not for the feint of heart. Each show has two intermissions of 20 minutes.

Angels in America on Broadway Background

The play is subtitled “A Gay Fantasia on National Themes,” and is an ingenious exploration of identity, illness, and American culture, set against the backdrop of the AIDS crisis and the Reagan administration. This production transfers to Broadway after a highly lauded run at London’s National Theatre.

The plays are directed by Marianne Elliott, whose Broadway credits include The Curious Incident of the Dog in the Night-Time and War Horse, incidentally two of the most successful British transfers to Broadway in recent years. A staggering masterwork, Angels in America: Millennium Approaches earned the Pulitzer Prize for Drama as well as the Tony Award for Best Play in 1993, while Angels in America: Perestroika won the Tony Award for Best Play in 1994.

The plays were also adapted into a successful HBO mini-series in 2003, directed by Mike Nichols and starring Al Pacino, Meryl Streep, Jeffrey Wright, and Mary-Louise Parker. With this superb cast, this modern classic of American theatre is not to be missed during its limited engagement.

This production of Angels in America stars some of the most exciting actors working today. In the role of Roy Cohn, a McCarthyist lawyer who is himself deeply closeted, is Nathan Lane. Lane’s Broadway credits include Tony Award winning turns in A Funny Thing Happened On the Way to the Forum and The Producers, as well as Waiting for Godot, The Odd Couple, and others. "Guardians of the Galaxy" star Lee Pace takes the role of Joe Pitt, meanwhile, in the role of Prior Walter is Andrew Garfield, who previously appeared on Broadway in the 2012 production of Death of a Salesman starring Philip Seymour Hoffman. His impressive film-starring roles include "The Amazing Spider-Man" and "99 Homes". In the role of Harper Pitt is Denise Gough, who is making her Broadway debut in this production, but who also stars in the Off-Broadway British transfer of People, Places and Things.

Is Angels in America Good for Kids?

Due to strong language and adult themes, the show is most appropriate for those aged 12 and above. Children under the age of 4 will not be permitted in the theatre.

(American Associates of The National Theatre)