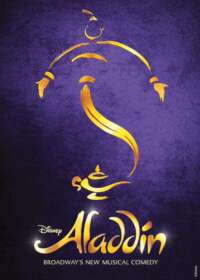 Musical developed from the beloved 1992 Disney classic animated film where a homeless ‘street rat’ named, Aladdin, is fated to meet the Princess Jasmine

Aladdin began as an ancient folk tale that was passed down through the generations by Syrian storytellers.

The story of Aladdin was later added to The Arabian Nights story collection in the early 18th century by the French writer, Antoine Galland and the fable has since been developed over time.

The Modern History of the Aladdin Story

In 1952 the ancient story was developed into a movie entitled Aladdin and His Lamp. That movie was directed by Lew Landers and starred Johnny Sands and Patricia Medina in the leading roles.

In 1992 Disney took the idea and developed their own animated film, Aladdin, which was directed by Ron Clements and used voices from Scott Weinger, Robin Williams and Linda Larkin.

A Broadway version based on this movie would come to the Great White Way in 2014 and made stars out of its lead performers. Aladdin was also turned into a live-action movie in 2019 that starred Will Smith, Mena Massoud and Naomi Scott and received somewhat middling reviews.

In 1992, and in a predictable move for Disney, they took the public domain fable of Aladdin and reworked the story for the animated movie. This action means that they do not own the rights to the story, which reduces their ability to monetize the brand as they would do on other Disney assets like The Lion King or The Incredibles, which they own outright.

When Disney took the reins of Aladdin and turned the classic story into the animated movie, it was not expected to amount to much at the box office, so Disney did not allocate a large marketing budget to the movie as they spent very little developing the movie in the first place. In a surprise turnaround, the movie became very popular, very quickly and ultimately made $504 Million for Walt Disney Studios as well as being the most successful movie of 1992.

Show Failure at the 2014 TONY Awards

Following the success of the 1992 movie, the Broadway show for Aladdin would follow in 2014 and went on to receive four Tony Award nominations, but won just one for “Best Performance by a Featured Actor in a Musical”.

The book for the show was written and adapted by Chad Beguelin who is a six time Tony Award nominee. Beguelin also worked on lyrics for the show, along with Broadway legends Tim Rice and Howard Ashman. Ashman was a talented lyricist who worked on many other Disney shows as well as Aladdin.

Ashman passed away in early 1991 and after his death he received a Grammy, a Tony and an Oscar Award for his creativity in his theatrical work.

The other main lyricist for the show, Rice is one out of a handful of talented creative professionals who are part of the esteemed EGOT award winning (Emmy, Grammy, Oscar and Tony) club.

Since Aladdin the musical’s Broadway debut in 2014, the production has been performed in seven other countries besides the United States. Those Countries include Germany, Canada, Singapore, Japan, Australia, England and New Zealand. The U.S national tour started in 2017 and has held performances all around the country in various cities that have included Chicago, St Louis, Memphis, Austin, Cleveland and many others.

Jonathan Freeman departed Aladdin on January 23, 2022. Freeman was the only actor from the original animated 1992 Aladdin movie who also starred in the Broadway show. The show opened in 2014 and Freeman played his role up until January 2022, when he left. Freeman voiced the part of Jafar in the movie and acted the same character in the Broadway show. Freeman was replaced by fellow original Broadway cast member Dennis Stowe.

Set in the mystical (and fictitious) town of Agrabah in ancient Persia, the penniless main character Aladdin meets the beautiful princess, Princess Jasmine, and the two fall madly in love with each other.

The Princess’s father, who is the King (or Sultan) of Agrabah, does not approve of the match. Conflict ensues when Jafar, who is the Sultan’s advisor, discovers the romance and wants to put a stop to it because he intends to marry Princess Jasmine and become King himself. When Jafar discovers the truth about Aladdin and his upbringing as a poor boy who has lived on the city’s streets for many years, he is outraged by the challenge for Princess Jasmine is coming from such a lowly person.

The Sultan insists that Aladdin and his daughter stop seeing each other immediately and he dictates that Princess Jasmine is only allowed to marry a prince of a similar royal status. Jafar faces the same problem in that he is of lowly stock as well and plans to use three wishes from the genie who emerges from a mystical lamp to become a prince. In a turn of events, the lamp ends up in Aladdin’s possession and the genie grants him three wishes which he ultimately uses to follow his heart and secure the love of his life, Princess Jasmine and her father, The Sultan.

Aladdin is a spectacular musical filled with familiar tunes from the 1992 Disney animated film. The show has an impressive 35 person cast, who perform spirited choreography with bright costumes and quick setting changes. The musical’s evil villain, Jafar is portrayed by Jonathan Freeman who has performed in the role since the show’s Broadway debut in 2014 and who also played the voice of the same character in the original 1992 animated film.

The show’s signature ‘magic carpet ride’ scene takes viewers along for fun surprises and songs like “Friend Like Me” leaves theatre-goer’s hearts thumping like a drum all the way to the show’s intermission. Throughout the show, Aladdin allows audience members, young and old to relive the gleeful pleasures of their youth with the show’s recognizable, catchy songs and fun dance routines.

Is Aladdin Good for Kids?

Children under the age of 4 are permitted in the theatre, but the show is recommended for kids ages 6 and older because of some loud noises that come as a surprise. All guests regardless of age, must have a ticket to view the show, children are not permitted to sit on the lap of their accompanying adult.

Purchase the Broadway Discounts Guide to get details on how to get Lottery and Rush Tickets Tonight (if available) for Aladdin. 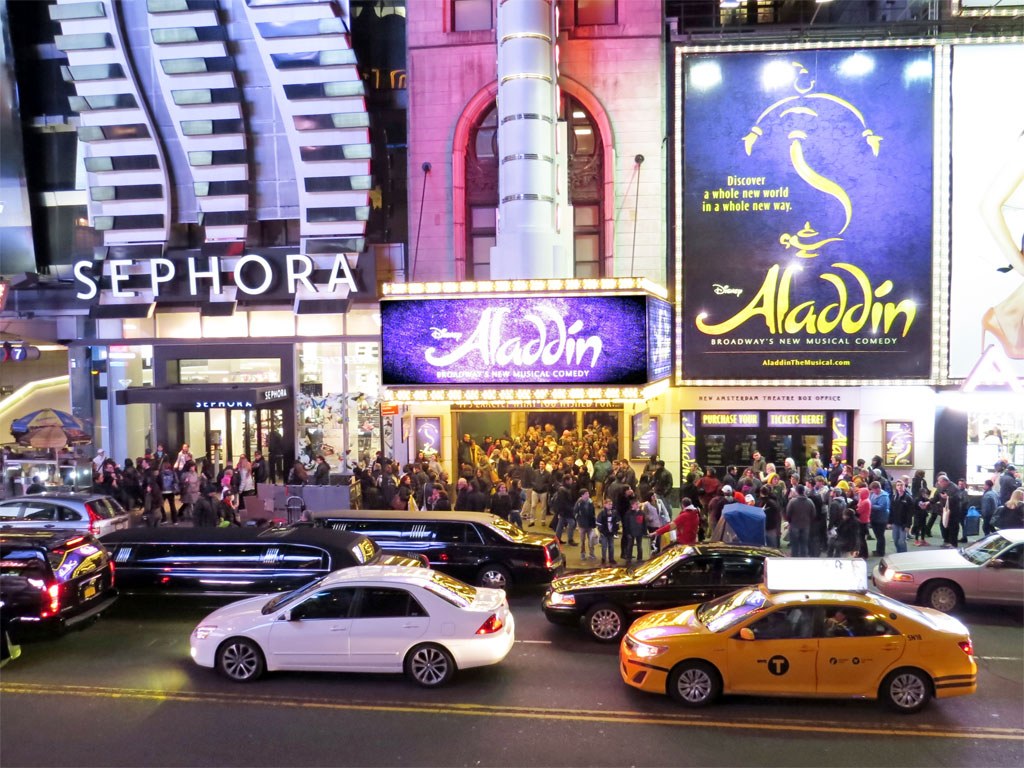