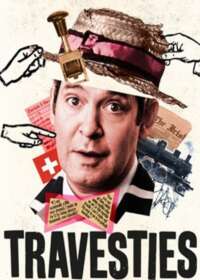 Travesties is a play by the great contemporary playwright Tom Stoppard. The play was first produced in 1974, and it was recently revived in London at the Menier Chocolate Factory directed by Patrick Marber, and starring Tom Hollander as Henry Carr. It is this production that now comes to Broadway at the American Airlines Theatre in a Roundabout Theatre Company production, with Hollander reprising the lead role.

In addition to Travesties, Tom Stoppard is an incredibly prolific playwrights, whose works are not only numerous but intellectually profound. His other works include Rosencrantz and Guildenstern Are Dead, The Real Inspector Hound, After Magritte, Jumpers, The Real Thing, On the Razzle, Arcadia, Indian Ink, The Coast of Utopia, Rock ‘n’ Roll, and The Invention of Love. This production was a smash success in London, where it was nominated for the Olivier Award for Best Revival of a Play, and upon which the New York Times called it a “near miraculous production.”

The director Patrick Marber is a very successful comedian, playwright, director, screenwriter, and puppeteer based in London, and his previous foray on Broadway was the 2009 production of After Miss Julie, for which he adapted the Strindberg play, and which also ran at the American Airlines Theatre directed by Michael Grandage. With the rave reviews earned by Tom Hollander in the lead role, this play is not to be missed.

Tom Stoppard is one of the greatest living playwrights in the world. His works have been enjoyed on a global scale, and it is a special occasion when one comes to Broadway. Travesties is an especially insightful and multilayered piece. It centers on the real life historical figure of Henry Carr, who happened to be in Zurich during World War I along with three more notable figures: James Joyce, while he wrote Ulysses, Tristan Tzara, during the rise of Dada, and Lenin, in the period leading up to the Russian Revolution. In Travesties, Henry Carr reminisces about this time, while the play flashes back to the time about which he speaks. The play also uses the framework of Oscar Wilde’s play The Importance of Being Earnest, which Carr starred in, in addition to being an English consular official. Through the parallels with this Wilde play, Stoppard is able to explore the themes of art, war, and revolution.

Is Travesties Good for Kids?