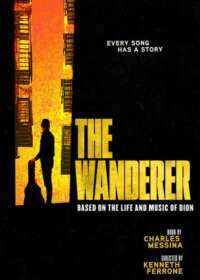 Discount Broadway Tickets For The Wanderer - This Show Is Now Shelved

A bio-musical recounting the life of 1960’s doo-wop singer Dion DiMucci, a man who learned the hard way that fame can be both a blessing and a curse.

The Wanderer on Broadway Background

Despite eeeeThe Wanderer is a new jukebox musical that premiered at the Paper Mill Playhouse in Millburn, NJ and came with a clear road map that brought it to right onto Broadway, following in the footsteps of Beautiful, The Cher Show, and Ain’t Too Proud, all shows with a similar thematic narrative musical bio.

The story chronicles the journey of Rock & Roll Hall-of-Famer Dion through many of his life-defining moments that include his tough childhood growing up in the Bronx, forming his first band that results in a band members death, his heartbreaking missed destiny and his tragic battles with heroin addiction.

Despite the show being set over half a century ago, the over-arching themes and message still feel relevant in the drug society that 21st Century America has now become, with the Opioid crisis now killing in excess of 50,000 people per year.

The show’s book was written by Charles Messina, who is best known for his previous work on the autobiographical play A Room Of My Own.

Messina’s book is brought to life as a result of the motivation provided by the musical’s director, Kenneth Ferrone, who fell in love with the story. It is Ferrone who recently gained critical acclaim for his work on Fox TV network’s “not-so-live” rendition of the classic Broadway musical Rent and for the national tour of Cruel Intentions.

Despite the show being set to go to Broadway, it instead ended up Off-Broadway at The Harold and Miriam Steinberg Center for Theatre, Laura Pels Theatre. It runs June 23—August 21, 2022

The Wanderer follows real-life doo-wop and rock star Dion on his rise to fame in the 1950's and the returning addiction battles that accompanied his success into the 1960's.

Beginning with his upbringing in the Belmont section of the Bronx, Dion discovers his love for music and recruits his friends into his first musical outfit, aptly named Dion and the Belmonts. The group achieves some mild local success , but Dion’s rise to international stardom truly begins when he leaves the group to launch his own solo career.

Through a medley of many of his greatest hits such as “Runaround Sue” “Ruby Baby” and the titular “The Wanderer”, Dion begins to reap the rewards of his musical success. Though at first his fame appears to be a dream come true, Dion soon discovers the dark side of being a musical celebrity and the pressure to produce hit songs that the industry exerts upon him.

Dion begins to relapse back into his teenage heroin addiction and as he loses focus, he sees his fame begin to wane into the latter half of the 1960s. With his career falling apart at the seams, Dion must find a way to get his life back on track, win back the woman he loves and just survive when all the people around him are succumbing to drug overdoses and painful deaths.

Is The Wanderer Good for Kids?

This show is not suitable for children under the age of 12 as it delves into many dark topics such as drug abuse and untimely death.