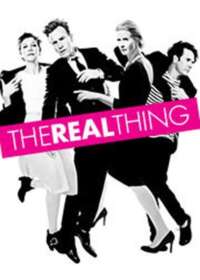 The Real Thing on Broadway Show Information and History

The Real Thing is written by one of the world’s greatest playwrights, Tom Stoppard. Originally having premiered in London in 1982, the play centers on the relationship between the principal characters Henry and Annie, a playwright and an actress.

The Real Thing on Broadway Background

The substance of the play goes beyond the surface level, however, as the author teases the audience about the nature of reality, using a play within a play as one of its many devices. Not only does the play deal with the metaphysical space between façade and reality, but it also considers the profoundly human subject of honesty.

In a way only Tom Stoppard can achieve, The Real Thing is the best of both the worlds of philosophy and drama. The play is semi-autobiographical, but the drama clearly exceeds mere retelling of fact. The play is rife with theatrical twists and turns; for example, the first scene is about a husband accusing his wife of adultery, but in the second scene, the same woman is married to a different man. We then realize that the first scene was a play within the play, and the woman is an actress.

Is The Real Thing Good for Kids?

The intellectual nature of the show makes it most appropriate for children over the age of 10. Children under the age of 4 are not permitted in the theatre.