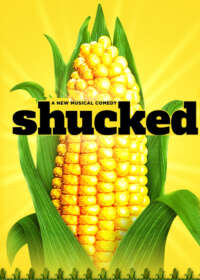 Set in the south, the story follows a couple — and the characters they meet along the way — who puts their wedding on hold to save their small town.

In the Fall of 2022 Shucked had a successful a three-week run at the Pioneer Theatre Company in Salt Lake City, Utah.

Jack O’Brien’s most recent Broadway directing credit is the 2019 revival of “All My Sons.” His directorial career spans more than six decades and includes the 1969 revival of “Cock-A-Doodle Dandy,” the 1994 revival of “Damn Yankees,” “The Full Monty,” “Dirty Rotten Scoundrels” and” “Charlie and the Chocolate Factory.” O’Brien’s three Best Director Tony Award wins were earned for his work on “Hairspray,” the 2004 revival of “Henry IV” and “The Coast of Utopia.”

Horn has written the book for “13” and “Tootsie,” the latter for which he won a Tony Award. He also provided additional material for “Dame Edna: Back with a Vengeance.”

A hilarious and audacious farm-to-fable musical about the one thing Americans everywhere can’t get enough of: corn. Shucked is the new musical comedy that proves sometimes tearing down a few walls, rather than growing them, is the only way to preserve our way of life.”