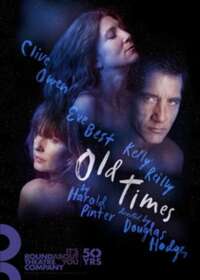 Old Times is a world renowned play by Nobel Prize winner Harold Pinter. The play surrounds a man named Deeley, the crux of the play has Deeley meeting a former friend of his wife, Kate. The reunion between Kate and her friend turns out not to be as benign as Deeley anticipated as Kate’s former friend harbors an ulterior motive.

The play first premiered in the United Kingdom in 1971, since which it has enjoyed several productions. Most recently, it had a major revival in London’s West End at the aptly named Harold Pinter Theatre in 2013, where the two female roles were played by alternating actresses on each night. This was an interpretation by that production’s director, who keenly saw a message in Pinter’s play about the changeability of humanity particularly in matters of love.

This production will be directed by Douglas Hodge, a frequent performer and director of Pinter’s work who considered him to be a mentor. Hodge was recently seen as an actor on Broadway in the revival of La Cage aux Folles, for which he won a Tony Award. This production stars Clive Owen making his Broadway debut. Owen is best known for his screen performances, recently including the Cinemax series “The Knick” and the film Closer, as well as London stage performances including the play version of Closer, Design for Living, and Romeo and Juliet. The additional two parts are played by Eve Best (The Homecoming, A Moon for the Misbegotten) and Kelly Reilly (After Miss Julie).

The show is a fascinating portrait of a man and his wife, as well as her best friend. When the play opens, a married couple Kate and Deeley are smoking cigarettes and conversing about Kate’s friend Anna who is planning to pay them a visit. From the very beginning, there are certain elements of peculiarity – such as that Deeley says he has never heard of Anna, though Kate says they roomed together 20 years ago. Still, these momentary glimpses of confusion are easy to brush off as misunderstanding, but then things become stranger. Anna arrives in the next scene, and the three characters exchange stories. However, when Kate goes upstairs to take a bath, Deeley confronts Anna and says he does remember her, accusing her of false pretenses. Like all the best Pinter plays, this is a surrealistic blend of reality and absurdities, resulting in a fascinating study of humanity.

Is Old Times Good for Kids?

Old Times is most appropriate for children over the age of 10. Children under the age of 4 are not permitted in the theatre, but any child in the single digits should not be in the heatre for this show.