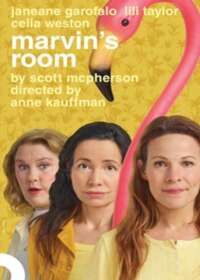 Marvin's Room deals with two sisters who are taking care of their aging father; Bessie, who is herself dying of leukemia and yet is an avid caretaker, and Lee, who is a mentally unstable free spirit who does not take on any caretaking responsibilities. The story is therefore about a dying woman taking care of a dying man, but it is ultimately life-affirming and a tale about unconditional love.

Marvin’s Room, not to be confused with hip hop artist Drake's hit song, is a play by Scott McPherson that premiered in Chicago in 1990, followed by Off-Broadway productions in 1991 at Playwrights Horizons, and in 1992 at the Minetta Lane Theatre. It was also made into a 1996 film starring Meryl Streep, Diane Keaton, and Leonardo DiCaprio. The Roundabout production of Marvin’s Room is directed by Anne Kauffman, who is making her Broadway directorial debut.

The show is also bound up in an interesting yet tragic history of its own. McPherson died in 1992, during the Off-Broadway run of Marvin’s Room. He died due to complications from AIDS, after caring for his partner through his own deterioration and eventual death, also from AIDS. Therefore, although Marvin’s Room is not directly about the AIDS epidemic, McPherson’s writing was heavily informed by living in the midst of the worst of this period, and the themes of Marvin’s Room are inextricable from the emotions McPherson experienced in that time.

A highly accomplished Off-Broadway director, Kauffman’s many credits include Belleville by Amy Herzog and New York Theatre Workshop, Detroit by Lisa D’Amour at Playwrights Horizons, Maple and Vine by Jordan Harrison also at Playwrights Horizons, Stunning by David Adjmi at LCT3, Slowgirl by Greg Pierce also at LCT3, Sixty Miles to Silver Lake by Dan Le Franc at Soho Rep and many more countless world premieres by excellent writers at prestigious Off-Broadway venues. The opportunity for Kauffman to take on the first revival of Marvin’s Room at Studio 54 in a Roundabout Theatre is sure to be a great success.

Is Marvin's Room Good for Kids?