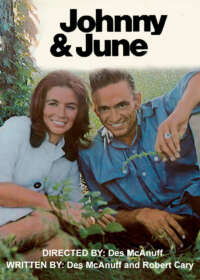 Johnny Cash is facing troubles around his drug and alcohol use and its up to June Carter-Cash to pull him out of the hell-hole that he has put himself in.

Johnny and June on Broadway Background

Media mogul and former Sony music boss Tommy Mottola is bringing the life of country music icon Johnny Cash to the Great White Way.
The working title of the project is “Johnny & June,” referring to the late singer and his famous wife, June Carter Cash.

The production features the “Folsom Prison Blues” singer, who is one of the best-selling country recording artists ever with a career that crossed beyond country music into popular music with his hits including “Ring of Fire,” “I Walk the Line” and “A Boy Named Sue.

Walk the Line is a 2005 musical romantic drama film that was directed by James Mangold. The screenplay was written by Mangold and Gill Dennis, is based on two autobiographies authored by singer-songwriter Johnny Cash, 1975's Man in Black: His Own Story in His Own Words and 1997's Cash: The Autobiography.

Its in the early 1960s and Johnny Cash is touring the US with the Carter Family. The group also includes Mother Maybelle's daughters, Anita, June, and Helen. June takes a liking to Johnny and the two begin a romance that would last for the rest of their lives.

Drugs booze and breaking the law will test their relationship beyond the limits until Johnny causes a forest fire while in a drugged-up stupor and nearly kills all of them.

Is Johnny and June Good for Kids?

The life of Johnny Cash is not for the faint of heart as subject matters like drug use, alcoholism and infidelity are discussed and seen to a high degree.

The show may only be appropriate for children over the age of 16.