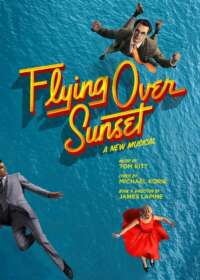 Three iconic people of the 1950’s take a mind altering substance, LSD, which changes their perspective of the world and the course of their lives.

Flying Over Sunset on Broadway Background

Flying Over Sunset is a revolutionary new musical on Broadway. The musical was written by James Lapine, who is an acclaimed American theatre director, playwright, Tony Award winner and Pulitzer Prize winner. Lapine is most well known for writing Into the Woods and Sunday in the Park with George.

Inspired by the LSD Parties of the 1950's

This new show was inspired by the LSD (Lysergic Acid Diethylamide) parties of the 1950’s and features three of Lapine’s childhood heroes namely, Aldous Huxley, the famous writer and philosopher, Clare Boothe Luce, a radical Conservative politician and the American actor Cary Grant. All three are depicted in the show as taking the drug to enhance their thinking. The actors Harry Hadden-Paton, Carmen Cusack, and Tony Yazbeck (each Tony nominated actors) play the roles of Aldous, Clare, and Cary respectively.

The show had been scheduled to open at the very start of the pandemic. This opening of this Broadway musical was then delayed by the Lincoln Center Theater. The show's writer James Lapine was dismayed at the delay but was glad that his show did not create any new infections. Flying Over Sunset was originally scheduled to begin its in-preview performances on April 14th, 2020 and then run through June 28th, 2020, but the show was initially postponed until the Fall of 2020,but had to wait until November 2021.

The red carpet opening had been scheduled for April 30th, 2020. The announcement to postpone the show was made on Tuesday, March 24th 2020, almost two weeks after all other Broadway theatres were officially shut down and three weeks before the show was scheduled to open in previews. While the delay was unfortunate for the production, critics believe that this Broadway show was one of the lucky ones, because they were not forced to cancel the entire production.

Following its opening on November 11. 2021 Flying Over Sunset’ ended its Broadway run on Jan. 16, 2022. This is a full month earlier than expected. The show was previously scheduled to run though Feb 6, 2022. At the time of closing, it played 63 performances. This is the first non-profit organization to close a production early this season. Non-profit shows do not have to make a profit to stay open, and most times are done for the purpose art as opposed to financial viability.

Flying Over Sunset is a two act musical that follows three of the most influential people of the 1950’s era, while they each experience the powerful mind altering effects of the (then legal) drug commonly known as LSD. Cary Grant, Clare Boothe Luce, and Aldous Huxley take center stage in this sojourn in the mind-altered state of LSD in the early 1950s. This new musical is inspired by those mind-expanding experiences and is set in various locales in the world during the free state-of-mind of post WW2, but still innocent enough world, of the 1950’s.

The show is loosely based on real life stories and shows the use of LSD by Aldous Huxley, who was an English born world-famous philosopher. Clare Boothe Luce, was an American born author, U.S. politician and the first woman to become an internationally based U.S. Ambassador. Cary Grant, was a great American actor, who is now known as one of “Hollywood's definitive leading men”.

The first act shows each one of them taking the drug at the same time, but separate from one another and unaware of each other. The second act shows them all taking the drug together at a NYC dinner party. The audience watch as each of them are in their hallucinogenic state and can draw on the different, yet similar, enlightening experiences that they each experiencing. The play depicts the use of the substance, LSD, as potentially a good thing for humanity and attempts to educate people in order to legalize the drug.

Critics Challenge that the Show is an Infomercial for Drug Legalization

Many critics believe that Flying Over Sunset is an infomercial for the legalization of all drugs. The show, which about the use of the mind altering substance LSD, comes at a time when even marijuana still remains a schedule 1 felony at the federal level. Although many states have passed their own marijuana laws and no longer prosecute, all harder drugs are met with stiff fines and jail time. This show comes with head-on approach to change the thinking about drugs and asks 'Who's life is it anyway?'.

Is Flying Over Sunset Good for Kids?

This show is not for kids under the age of 17, because of the show's content matter and its promotion and use of illegal substances.