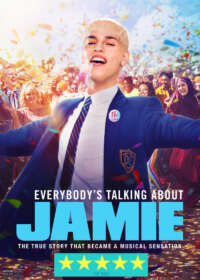 Inspired by a true story, Jamie is sixteen and lives in public housing in the North of England where he doesn’t quite fit in. Supported by his family and friends, Jamie overcomes prejudice and steps out of the darkness, into the bright spotlight as becomes the first-ever sixteen year old drag queen.

Winner of three of London's WhatsOnStage Awards: Best New Musical, Best Actor in a Musical and Best Supporting Actress in a Musical, Everybody’s Talking About Jamie appeared at the West End's Apollo Theatre in London.

A filmed stage performance was shown in cinemas worldwide in 2018, and then a different feature film version was developed and released on Amazon Prime Video in 2022.

This moving and upbeat musical tells the true story of a young man who overcomes prejudice and homophobia to become a drag queen and ultimately a schoolyard legend.

The moving and uplifting documentary follows the emotional story of teenager Jamie Campbell as he makes a bold step on his difficult journey into adulthood. The film shows Jamie battling prejudice from his community, but also within his own family, while pursuing what he feels is his destiny: becoming a drag queen.

Is Everybody’s Talking About Jamie Good for Kids?

The show contains a few swear words, reference to drugs and underage sex, and is deemed unsuitable for children under 14 years of age.