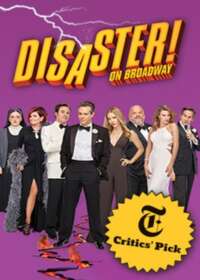 Disaster takes place aboard a floating casino boat that is sequentially struck with a series of catastrophe including an earthquake, a gigantic tidal wave, an inferno and a huge swarm of bees. The show is self-consciously ditsy, featuring an outrageous cast dancing and singing the night away afloat the sailing casino and discotheque, despite the series of crazy accidents that hit them.

The musical has a book written by Seth Rudetsky and Jack Plotnick. Seth Rudetsky, who also stars in the musical, is best known for hosting the afternoon Broadway Sirius XM radio show, and was also an Emmy-nominated comedy writer for The Rosie O’Donnell Show, a writer for the Grammy Awards, and the creator of the opening numbers for the Tony Awards in 1998 and 2000. Jack Plotnick, who also directs the show, is best known for his acting roles on shows including Ellen and Buffy the Vampire Slayer. Alongside Rudetsky, the cast includes a number of high-profile Broadway stars, including Tony winners Faith Prince and Robert Bart, Tony Award nominees Adam Pascal, Kevin Chamberlin, and Kerry Butler, Drama Desk winner Rachel York, and Drama Desk nominee Jennifer Simard. Disaster! is a jukebox musical, featuring familiar 70s tunes including “Knock on Wood,” “Hot Stuff,” “I Am Woman,” and “Daybreak.” The show received positive reviews in its Off Broadway runs, with Charles Isherwood of the New York Times declaring that Disaster! really earns that exclamation point.

Disaster! is a new musical that comes to Broadway following two Off-Broadway runs, first at the Triad Theatre in 2012, followed by a six month run at St. Luke’s Theatre in 2013. Disaster! is a parody style musical of disaster movies from the 1970s, such as Airport 1975 and The Poseidon Adventure. The choreography is done by Joann M. Hunter, who also choreographed On a Clear Day You Can See Forever, Curtains and the huge seller School of Rock – the Musical. Using popular songs from the time period including hits like Knock on Wood and Hot Stuff, Disaster! pays comic tribute to the iconic disaster movies of the 1970s, ensuring a very fun night in the theatre.

Is Disaster Good for Kids?

The show may be inappropriate for children ages 9 and under due to moderate language. Children under the age of 4 are not permitted in the theatre.