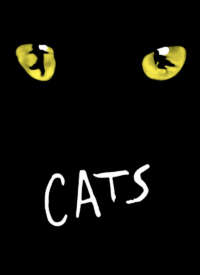 Broadway classic musical with mesmerizing visual effects and exciting dance scenes where cats compete to be chosen to be elevated to a higher realm.

The famous Broadway musical Cats, is based on T. S. Elliot’s story “Old Possum’s Book of Practical Cats” which was published in 1939 at the outbreak of the Second World War. Many lyrics from the show were taken from the original book, as well as other writings from the lauded Nobel prize winning poet.

The show’s musical score was composed by the acclaimed theatre composer, Andrew Lloyd-Webber, who is one of the rare members of the “EGOT Club”, which is a group of people who have won at least one award from each of the major American entertainment award shows, (Emmy, Grammy, Oscar and Tony). The exclusive EGOT club only has 15 members in total.

One of the lead actresses, Marlene Danielle, played the cat-character Bombalurina for the entirety shows production of eighteen years and 7,485 performances. This feat is something that does not happen that often in the Broadway show business where new actors and actresses are constantly being rolled in to replace the original actors.

Cats, The Broadway Musical takes place in a junkyard in the middle of a populous city modeled much like Detroit in the 1980's and follows the most important night of the year for a “clowder” of cats who call themselves “The Jellicle Cats”.

The yard they live in is made up of old cars, shattered bottles and plenty of boxes full of clutter which is used by the cat-characters to jump and dance around throughout the magical night. The Jellicle cats introduce us to the event that makes tonight night so special, through song and dance in “The Jellicle Ball”.

The event is a fun filled annual late night competition, where the cats from the tribe audition for the tribe’s elders. The auditioning cats are hoping to outshine each other and be the one selected by the elders when they make their “Jellicle choice”, which is a chance to go on a journey to a place called the “Heaviside” and to return as a reborn cat with spiritual enlightenment, but this may be an attempt by the cat elders to actually cull the herd and remove cats that threaten their power structure.

The actors regularly break the fourth-wall, and audience members may find themselves becoming a character in the show, taking the level of engagement of the show to a whole new level when the cats come into the audience and focus on individual people for an extended amount of time.

The Musical Cats is unique in terms of how it was put together and created. The show is comprised of many short sketches that are cleverly woven in between marvelously choreographed visual pieces and sensational songs.

The show was created with people of all ages in mind, children and adults will enjoy it thoroughly. It has many catchy songs, superb dance scenes and fantastic visual effects which together, makes for a highly memorable performance. The show's universal appeal is founded in the fact that children see the show as a warm story about cats who can speak and adults who see it as a criticism of political tyranny.