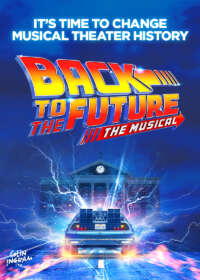 Back to the Future

Discount Broadway Tickets For Back to the Future

Back to the Future Summary

Musical adaptation of Robert Zemeckis and Bob Gale’s classic cult 1985 film of the same name, about time travel and the tribulations of correcting the mistakes of the past and the future.

Back to the Future on Broadway Background

Back to the Future is a Broadway musical with the show book written by Robert Zemeckis and Bob Gale, the original writers of the movie screenplay.

The BTTF book is loosely adapted from the duo’s original screenplay of their award winning film of the same name, but with a few changes to characters and plot. When the original film was first released in 1986, it was met with critical acclaim and was nominated for five Baftas, four Golden Globes, and four Oscars.

Movie Surprisingly Won Only One Academy Award in 1986

The uber-popular movie Back to the Future ultimately only took home one Academy Award at the 1986 Oscars. That Oscar was for “Best Sound Editing”. The BTTF movie received only three other Oscar nominations that year. The Oscar winner for Best Picture in 1986 was Out of Africa and Back to the Future did not even get a nomination in this category.

The BTTF movie spawned two movie sequels, an animated TV series and then an attraction at Universal Studios Florida theme park, which has since closed.

The new musical version features music by Alan Silvestri and Glen Ballard. Silvestri is an Academy Award nominated composer and frequent contributor to Zemeckis’ creative team, having composed music for not only the titular trilogy of BTTF, but also for Forrest Gump, Cast Away and Who Framed Roger Rabbit.

Ballard is a songwriter and lyricist best known for his work on Alanis Morissette’s album Jagged Little Pill, which went on to win Grammy Awards for “Album of the Year” and “Best Rock Album”. It would later be adapted into a Broadway musical of its own.

Rocky Start For The Broadway Musical

The Broadway production was met with a rocky start as the initial director Jamie Lloyd left the production early due to “creative differences” with Zemeckis, causing the premiere to be pushed out to February 2020. Lloyd wanted to change the theme to be more about the love interest, but Zemickis wanted to follow the original-movie formula down to the letter.

The final award-winning creative team that backed the project was paired with Matilda star Olly Dobson who was then cast as Marty McFly. The show manages to entertain longtime fans of the movie and Broadway newcomers alike, a feat rarely achieved on the Great White Way.

It should also be remembered that Zemeckis miscast the original BBTF movie role of Marty McFly with Eric Stolz, who tested poorly with audiences after a number of key scenes were already in the can. After much consternation by the director and producers, Michael J Fox was brought in to replace Stolz and large amounts of the movie had to be reshot with the new lead actor.

Back to the Future The Musical ran in London from 20 August 2021 to 12 February 2023 at Adelphi Theatre in The Strand. U.K. critics hailed the new show as a crowd-pleaser that’s faithful to the iconic film. BTTF earned Best New Musical award at the 2022 Olivier Awards in London.

Back to the Future The Musical follows Marty McFly, a rebellious teenager whose family is struggling to get by. Marty’s life soon changes dramatically as his friend Dr Emmett Brown reveals he has built a time machine in a modified DeLorean.

In a strange and intense turn-of-events, Doc gets shot by terrorists and Marty is forced to use the time machine in order to escape with his life. Marty ends up thirty years in the past and meets his parents who are at the same age as him.

His mere presence threatens to alter to space-time continuum, as his mom has now fallen in love with him rather than his actual father. With time running out, Marty must figure out how to get back to the present, warn Doc of his eventual death, and make his parents fall in love, all before he ceases to exist.

Is Back to the Future Good for Kids?

This show is suitable for children of all ages, as Marty McFly’s time-traveling tale has enthralled children for decades.