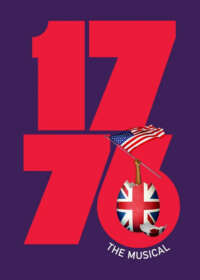 A historical musical chronicling John Adam’s efforts to persuade his fellow congressmen to vote for American independence from England.

1776 is Sherman Edwards and Peter Stone’s Tony Award winning musical detailing the events that lead to the signing of the Declaration of Independence.

Show Debut on Broadway in 1969

The show made its Broadway debut in 1969 and was met with positive reviews and five Tony nominations. Of these nominations, it ultimately won “Best Musical”, “Best Performance by a Featured Actor in a Musical”, and “Best Direction of a Musical”.

The show would go on to receive a film adaptation in 1972 that earned nominations in both the Golden Globes and the Academy Awards. The musical was revived on Broadway in 1997 and received a milk-toast reception and has now returned to the Broadway stage after a 14 year hiatus, but now with A-list actors and a whole new score.

Set in the Spring of 1776, the show follows John Adams, a oft-disliked political delegate from Massachusetts, as he attempts to convince his fellow members of the British controlled Second Continental Congress to vote on his proposals of American independence from King George in England.

The majority of Congress refuses to acknowledge Adams’ revolutionary ideas, leading the Massachusetts delegate to assemble a team of like-minded peers.

John Adams Brings Together a Powerhouse of Political Figures

With the likes of Benjamin Franklin, Thomas Jefferson, and John Hancock on his side, Adams attempts to convince the rest of Congress that independence from England is necessary to achieve self determination, proper taxation and freedom to choose its own future.

He achieves this through speeches, political appeasement, and one of the most important documents in American history, the Declaration of Independence, that forms the crux of democracy in the New World.

The show leverages upon the success of Hamilton, but fails to bring a hip-hop score that appeals to a younger demographic and instead goes with a conventional approach to the score.

This show is family friendly and a solid history lesson for any children in attendance.

However, some children may find the subject matter dull and a little bit uninteresting as it might feel like going to school.